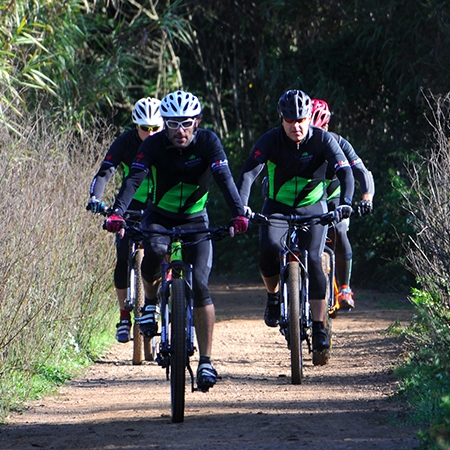 - You are not entirely familiar with the brakes and gears

- You need to stop to read and operate the GPS, or you have never used one

- You have never used cleats

- You are in poor to average physical condition

The Barcelona Green Ring MTB route is a circular route around the city with stunning views from every angle. This accessible MTB route, which combines mountain, coastal and city riding, is suitable for every rider.

Sorry for the inconvenience. We will upload this content shortly.

After meeting at our starting point, Club de Tenis Valldoreix (you can opt to use our transport from the Barcelona city centre), we will adjust our bikes, and you will be given a short briefing of the route and some basic safety rules.

We will begin at the Carretera de les Aigües, a wide, flat track with fabulous views of the city where Barcelona natives practise sport. We will ride through Vallvidrera and the Mirador dels Xiprers (an overlook with views of the southern part of the city), until we reach the end (or the beginning –depends on how you look at it! ;-) of this popular track in Plaza Mireia. From here we will ride through a portion of the city (including an occasional section with road traffic) until we reach the southernmost city limit, the Llobregat River.

From the Llobregat delta we will cruise until we reach Barcelona's other mountain, Montjuïc ("The Mountain of the Jews"). As a side note, Jean Baptiste Joseph Delambre and Pierre Méchain measured the length of the meridian arc between Dunkirk (France) and Montjuïc to establish the official 1 metre length of the decimal metric system.

We will ride through the Olympic Stadium climbing wall area and then head back down to the coast, where we will cruise for 10 km until we reach the Besós River, which is Barcelona's natural limit to the north. We will follow the delta upriver through the Besós Waterway Park, skirting the town of Santa Coloma de Gramanet. We will then head west towards Montcada, and from there go south to climb Collserola, passing through les Aigües Park, the Besós Overlook, the Torre Baró area and Forat del Vent, to finish up in the same place we started.

This MTB route through Barcelona does not include steep inclines nor is it technically demanding, but riders should take care while riding in traffic.

Once you have finished this MTB route in Barcelona, you will receive a personalised SPIN Report.

The organization reserves the right to modify some sections of the route and/or the accommodations if necessary. Our clients will be notified of any changes immediately.

Do you want to ride this route alone with your friends? Inquire about closed group prices at hello@spinatura.com.

Would you like us to design a route exclusively for you? We are experts in designing the route you've always dreamed of. Ask us now at hello@spinatura.com.

- Accommodation in charming hotels with half-board and double occupancy

Not included in price:

- Home pick up and delivery of your bike

Note: an additional individual rider fee will apply for groups of 4 or less. Please contact us for pricing.

Reservation for: Barcelona Green Ring MTB Route
Extra Services
Should you have any doubt during your booking process, please do nothesitate to contact us at +34 931 539 300 or via email hello@spinatura.com
In order to make your experience an unforgettable one, we offer you all those extras you might need. If you feel there’s anything missing in the list below, please don’t even hesitate for a sec to ask for it. We will do whatever is in our hand to please your wishes! ;-)

Contact us through hello@spinatura.com and we will advise you about availability and prices of:

Order Summary
Should you have any doubt during your booking process, please do nothesitate to contact us at +34 931 539 300 or via email hello@spinatura.com
Seat on the route149 €
Bike rental
Payment type
Total 149 €
(*)The remaining 60% must be paid by bank transfer 30 natural days before the start of the route at the latest
Proceed to checkout